Early years of learning English as a foreign language are of crucial importance. In Slovenia, the students start to learn English in the 2nd grade, some of them can choose to start already in the first grade. Associating learning English as something fun and actively including every individual student can be done via numerous activities. The article presents one such activity, the project “My town” created by the 3rd graders at the Fran Erjavec Primary School in Slovenia. The process combined making the houses and vehicles out of wooden blocks and creating the town’s map. The article includes the lesson plans.

In English lessons, the 3rd graders at the Fran Erjavec Primary School in Nova Gorica created the project “My town”. Within 12 school lessons and via various activities, such as reading a book Brown Rabbit in the City, singing songs and playing games, they, in groups, created their dream vehicles that travelled over their dream towns. This creative process led the students to create extraordinary vehicles, such as a magic broom and a well-adored ice-cream truck, words, the students would probably not have learned within the regular school curriculum. In addition, they learned how to give directions to one another, for example to use the expressions “turn left, turn right, go straight on past the …, it’s on your left/right”. Working in groups is the most rewarding, yet one of the most challenging tasks for a teacher. The article presents the process of the project “My town”.

Song »Look all around« from Happy Street 2, powerpoint projection »Look all around«, paper with a chart (each group), wooden blocks, book »Brown Rabbit in the City«, a board, a chalk, a poster from the book (with the buildings and the rabbit), jar lids.

The teacher introduces the song “Look all around” and sets the task to name all the vehicles from the song.

The pupils listen to the song and name the vehicles. The teacher elicits the answers and writes the words on the board.

With the help of the projection in which the song is presented with symbols, the students say the song. The students practise.

The teacher presents the dancing moves to sing next to the song, for example, to stretch out our hands for the stop sign and show “stop” in the song. The students dance and sing along.

In the next step, the students are given wooden blocks which they transform into buildings and blocks for the vehicles for the rabbit to travel in. They name the buildings and vehicles.

A person in a group chooses a building and a vehicle for the rabbit to travel in. He leads the person with the rabbit and the vehicle to the building.

In the end, each group presents their town. They practise the structure »There is/there are« which they know from the previous years. With the help of various games, the students practise the new vocabulary (vehicles and buildings). For example, the teacher gives the students jar lids. They create their own memory, two identical images for two jar lids, for example two images of »a school« which they glue under the jar lid. They play memory game. In the first rounds, they only name the images under the lid. When they are confident about the buildings and the vehicles, they can only take the pair when they correctly form the sentence »There is« or »There are« and get the pair.

The students wrote some impressions after the project finished.

“What I liked the most was that we worked together.”

“I liked that each of us contributed with his or her idea and that we helped each other.” Šeli, 3.A

Picture 1. A group of students playing with the vehicles 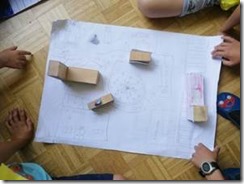 Picture 2. The map of the town and the buildings          Picture 3. Students practicing the words before the play

“I loved making a magic academy which was also in the story of Harry Potter, called Hogwarts School of Witchcraft and Wizardry. My vehicle was the flying broom Nimbus.”– Anna Sofia, 3. C

“I really liked working in groups and that we used wooden blocks for it.” Jan, 3. A

The project “My Town” involved early learners of English at Fran Erjavec Primary School in Nova Gorica, who worked in groups. Working in groups can be challenging because there are more conflicts among the students than if the teacher simply gives the instructions to the class as a whole and each does the same exercise and answers at the same time. Solving such problems that occurred during the lessons proved as an investment in the future. After the lessons, where these students were playing in the yard, they more quickly solved the problems that occurred because they had the techniques for problem solving from the class and it was easier and quicker for them to apologise and achieve a goal. The students learned English in a fun way, through a story and created their own project they could play with. All students were active, they supported each other and practised together so all reached the goals set at the beginning of the project.